The Dean of York, the Very Revd Dominic Barrington, today announced the appointment of David Colthup as York Minster’s new Chapter Steward and Chief Operating Officer. David will start his new role on Monday 9 January 2023.  He succeeds Kathryn Blacker who recently left the Minster for a new role at York Museums Trust.

David recently left the Army after a career spanning more than 30 years having originally commissioned into the Green Howards in 1989.  He has commanded Yorkshire soldiers in various locations around the world on operations and training and most recently was the Director of Operations for all Army recruiting and initial training.

David will also build and maintain effective relationships with the Minster’s diverse array of external partners in the city, Diocese of York, Yorkshire and the north of England, the wider Church of England and networks such as the Association of English Cathedrals and the Cathedral Workshops’ Fellowship where he will have a trustee role.

Commenting on David’s appointment, Dominic said:  “We are thrilled that David is joining the team at York Minster. In addition to his exceptional operational experience and expertise, David is an inspirational leader with a proven track record in supporting and valuing people and their contribution as individuals and teams. Efficient delivery of all of these services will enable the cathedral’s core purpose: the invitation to come to York Minster to discover God’s love as it has been revealed in Jesus Christ and the Holy Spirit.

David said: “I am hugely delighted and deeply honoured to have been appointed to this amazing role.  I am really looking forward to the challenge of learning about the people, the place and the sheer complexity of this fascinating cathedral, the Mother Church of the Northern Province of the Church of England.  I am particularly excited to have the opportunity to work with the great team of people at York Minster.”

David Colthup will be joining York Minster at an exciting moment of change.  The ongoing development and implementation of the Neighbourhood Plan offers significant opportunities to create a sustainable and financially viable future for the cathedral and its precinct.  He will also be in post in time to support the final stages of complex governance changes coming into effect with the new Cathedral Measure next year.

David Colthup commissioned into the Green Howards in 1989 and over the following 33 years served in various locations around Great Britain and in Kuwait, Iraq, Germany, Northern Ireland, Bosnia, Belize and Afghanistan.  His experience covers a wide range of roles and extends from working at the lowest levels in the Army all the way to the Ministry of Defence and as an advisor and mentor in Afghanistan.  In the last decade he has gained significant experience of recruiting new talent for the Army and the management and delivery of all types of military training.  He retains a close personal interest in both the Green Howards, as the Representative Colonel and a Trustee, and the Yorkshire Regiment of which he is Deputy Colonel of the Regiment and a Trustee.  David has been married to Jane for almost 30 years and they have three children in their twenties who between them work in the Army, the City and Parliament. 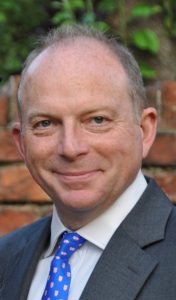