Bishop Stephen Geoffrey Cottrell, has today taken up the Braganza Crozier – his staff of office – in a short ceremony at York Minster, following his Confirmation of Election as the 98th Archbishop of York. 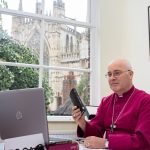 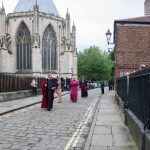 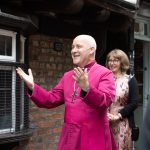 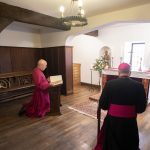 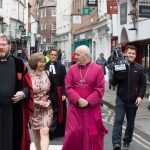 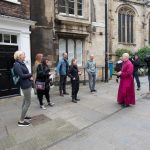 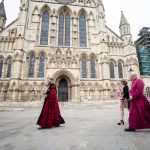 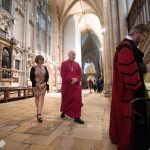 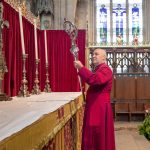 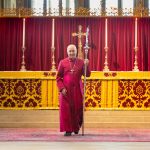 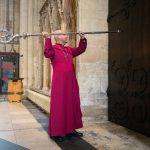 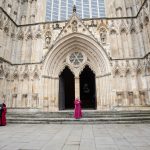 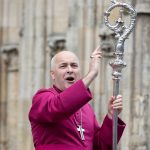 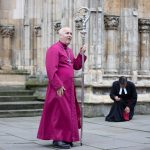 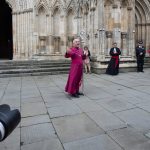 Watch below for clips of this historic occasion.

Bishop Stephen Geoffrey Cottrell, will today take up the historic Braganza Crozier – his staff of office – in a short ceremony at York Minster, following his Confirmation of Election as the 98th Archbishop of York.

Archbishop Elect Stephen’s Confirmation of Election service will be broadcast entirely via video conference due to the Covid-19 restrictions. This is available to watch at: https://www.churchofengland.org/aby98 from 11am on 9 July 2020.

The service will include music from York Minster Choir and Manor Church of England Academy, York. In the video resource that follows the service, young people from across the north of England will read a letter written by the medieval religious scholar Alcuin of York. Bishop Stephen will offer his first address as Archbishop of York. Prayers will be offered for the Archbishop, the Diocese of York and the Northern Province of the Church of England, as well as for the wider world in these difficult times.

Following the service, Archbishop Elect Stephen will make a short walk of pilgrimage to the shrine of St Margaret Clitherow. Here, he will be welcomed by the Rt Revd Terence Drainey, Roman Catholic Bishop of Middlesbrough.  After a few moments of prayer, Archbishop Elect Stephen will then proceed to the crypt of York Minster where he will pray at the tomb of St William of York.

Archbishop Elect Stephen will move to the Quire of York Minster where he will take up his Crozier in front of a small, socially distanced gathering drawn from his immediate staff representing the Archbishop’s Leadership Team, Bishopthorpe Palace and York Minster.

Commenting on the ceremony, the Rt Revd Dr Jonathan Frost, Dean of York said: “At a service of Enthronement, it is customary for a new bishop or Archbishop, to knock three times on the West Door with his or her Crozier to request admission. The pandemic has meant that we have to defer Archbishop Elect Stephen’s Enthronement service for a while. So the ceremony today is a simplified and low-key beginning to his ministry

“Once Archbishop Elect Stephen has picked up his Crozier from the High Altar he will move through the Minster to its West End.  Here he will knock three times on the inside of the West Door which will then be opened to the world.   This reversal of the usual symbolism, is intended to signify the openness of the Church to the world and reflects Archbishop Elect Stephen’s desire to share the good news of Jesus Christ with the communities it serves.”

Archbishop Elect Stephen spoke very positively about opening the doors at York Minster.  He said:  “The Church is the body of Christ. As such we are being formed in his likeness to be sent out into the world to bring hope, healing and wholeness.  I like the symbolism of opening up the doors of the church as we go out and see and be where God is already at work.

“As I take up the role of Archbishop of York, my focus will be on prayer, and I want to begin by praying for the unity of the Church, for all those persecuted, and for the Northern Province of the Church of England. May we be united as the body of Christ, of one mind and purpose to see God’s Kingdom here on Earth.”

The Archbishop of Canterbury, Justin Welby said: “I am so excited about working with Archbishop Stephen to communicate the good news of Jesus Christ. The next few years are going to be a huge adventure. We will be exploring our way into being a new Church in a new world.

“I’m sad we’re not able to all be together in York Minster to celebrate, yet. But we know that God is present to us at all times through the Holy Spirit. I’ll be praying for Archbishop Stephen as he officially begins his new ministry and as we begin that new adventure.”

Concluding, the Dean of York said:  “We look forward to being able to gather more fully to celebrate the beginning of Archbishop Elect Stephen’s ministry in due course. For now, we are happy to welcome Stephen and his family in great love and we pray for him as he prepares for the challenges and the joys that his office will bring.”

To watch the Confirmation of Election service, please click on: https://www.churchofengland.org/aby98  from 11am on 9 July 2020.

To watch the video following the Confirmation of Election service, please click on: https://www.churchofengland.org/aby98 from 12pm on 9 July 2020.

Born in Leigh-on-Sea, Essex, in 1958, Stephen Cottrell was educated at Belfairs High School, Leigh-on-Sea, and the Polytechnic of Central London. He found faith as a teenager through the work of youth organisations in his local church.  After a brief spell working in the film industry, he began training for ministry at St Stephen’s House, Oxford, in 1981 and was ordained deacon at the age of 26. He later studied for an MA with St Mellitus College.

Serving his curacy in Christ Church and St Paul’s, Forest Hill, south London, in the mid-1980s he was priest-in-charge at St Wilfrid’s, in Parklands, a council estate parish in Chichester from 1988 to 1993. He also served as Assistant Director of Pastoral Studies at Chichester Theological College at the same time.

He then moved to West Yorkshire, as Diocesan Missioner and Bishop’s Chaplain for Evangelism in the Diocese of Wakefield and in 1998 he took up the role of Springboard Missioner and Consultant in Evangelism. During his time in the diocese he adopted Huddersfield Town as his team alongside his beloved Spurs.

In 2001, he was called south to become Canon Pastor of Peterborough Cathedral and three years later was consecrated as Bishop of Reading. He took up his current role as Bishop of Chelmsford in 2010.

Author of more than 20 books including children’s books, he enjoys poetry, music and art. His 2013 book on the artist Stanley Spencer, Christ in the Wilderness, prompted a recent podcast reflection with Russell Brand, discussing the crucifixion and resurrection.

He has undertaken several pilgrimages, including twice walking the Camino to Santiago de Compostela in Spain, as well as pilgrim routes in England including to his future See in York.

A founding member of the Church of England’s College of Evangelists, he chairs a group of bishops with an interest in the media and is one of the authors of the Church of England’s Pilgrim course, a major teaching and discipleship resource. He also chairs the Board of Church Army. Based in Sheffield, but working across the British Isles, Church Army is an organisation committed to evangelism and social justice. He is Bishop Protector for the Society of St Francis.

Stephen was announced as the 98th Archbishop of York on 17 December 2019.

Stephen is married to Rebecca who is a potter.  They have three sons.

A Roman Catholic, Margaret Clitherow (1556-1586), lived at a time when being a catholic was considered to be an act of treason. Executed in 1586, she was canonised in October 1970. Her shrine is located in a building in York’s medieval Shambles that used to be Margaret’s family home. For more information about St Margaret and to visit the shrine go to stwilfridsyork.org.uk

About St William of York

Believe to have been born in the late 11th century, William Fitzherbert was twice elected as Archbishop of York (1141 and 1153). He lived through turbulent times navigating religious and political intrigue.  On his return to York in 1153 as Archbishop for the second time, the weight of jubilant crowds on the Ouse Bridge caused the structure to collapse into the river.  William prayed to God to save the people from drowning and not a single life was lost. William died in 1154, widely believed to have been poisoned.  The Miracle at Ouse Bridge and subsequent miraculous events attributed to William even after his death, resulted in his canonisation in 1224.  His tomb is in the Crypt at York Minster.

About the Braganza Crozier

The wife of King Charles II, Queen Catherine of Braganza (1638-1705), was the daughter of King John IV who in 1640, became the first king of Portugal from the House of Braganza. Catherine presented the crozier to James Smith, Vicar Apostolic of the Northern District on his consecration as Bishop of Calliopolis (the old name for what is now known as Gallipolli in Turkey) in the Chapel of Somerset House on 13 May 1688.  The Braganza Crozier is a silver pastoral staff made in four sections (unscrews) with special case. The design is crook leaf and dot with the main crook decorated with leaves and the line of dots (or small bells) on the outside edge terminates with a figure of Blessed Virgin and the Infant Jesus.  Decorative detail includes the Coat of Arms of Portugal with a crown (Queen Catherine’s), five small shield and a Bishop’s hat with seven tassels.