Former York Minster chorister Naomi Simon was yesterday (4 December), announced as a finalist in this year’s BBC Young Chorister of the Year contest.

A student and chorister at Rugby School, Naomi, aged 16, will join former York Minster chorister Samuel Brophy – now a student at Bootham School, York – in the finals of the contest which will be broadcast on BBC Two on Sunday 11th December at 1.15pm.

Canon Victoria Johnson, Precentor at York Minster said:  “We are absolutely thrilled to have two former choristers performing in this year’s finals.  Naomi and Sam are outstanding singers and we are proud that their singing journey began as choristers at York Minster.

“As well as nurturing raw singing talent, being a chorister equips children with a wide range of skills including resilience, self-organisation and self-discipline that will help to shape their learning for the future and prepare them for many life experiences.

“Regardless of the result next weekend, we hope that Naomi and Sam’s achievement will encourage and inspire more children to follow in their footsteps and think about being a chorister.  Our prayers and best wishes go to both of them for the finals.” 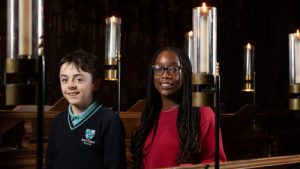