York Minster today celebrated the outstanding achievement of former chorister Naomi Simon who was yesterday announced as the winner of the BBC’s Young Chorister of the Year Contest.

Sixteen year-old Naomi, a chorister at York Minster from 2016 until 2020 and now a student and chorister at Rugby School, took the title in the contest final which was televised on BBC Two yesterday (Sunday 11 December). Samuel Brophy, 15, a former chorister from 2018 until 2020, also reached the final stage of the contest.

Naomi won through with a performance of the Christmas song ‘Mary, Did You Know’ composed by Lowry and Greene.

Canon Victoria Johnson, Precentor at York Minster said:  “There are no words to describe the absolute joy and pride of everyone at York Minster this morning.  It was thrilling enough to have two former choristers make it to the final. To have Naomi win the title is simply overwhelming.”

“Being a chorister is a very special experience.  As well as learning how to sing and perform the most sublime choral music, choristers also learn self-discipline, self-organisation, resilience and patience – skills that will prepare them for life. It is also great fun!”

“We hope Naomi’s achievement will inspire and encourage children who love singing to follow in her footsteps and explore the possibility of becoming a chorister.” 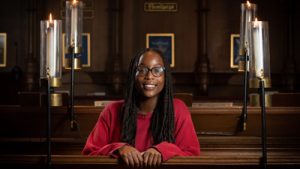