Christopher Strange has been appointed to the role of Assisting Organist at York Minster.  He succeeds Jeremy Lloyd who is taking up the post of Assistant Director of Music at Rochester Cathedral.

Born and raised in Cheshire, Christopher has just completed two years as the Graham Rogers organ scholar at Chelmsford Cathedral.  In July he graduated from the Royal College of Music with a first class honours degree under the tutelage of Margaret Phillips and Sophie-Véronique Cauchefer-Choplin.

In January 2018, he obtained the Fellowship of the Royal College of Organists winning all the available prizes. A student of Chetham’s School of Music, Christopher has also held positions at Manchester Cathedral and Grosvenor Chapel, London. 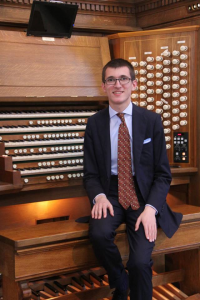