The Acting Dean of York, The Revd Michael Smith, has today announced he will retire from York Minster and stipendiary ministry early next year.

Michael joined the team at York Minster as Canon Pastor in September 2013 and was appointed Acting Dean of York in January 2022, following the appointment of the previous Dean, The Right Reverend Dr Jonathan Frost, as the Bishop of Portsmouth.

The Very Revd Dominic Barrington, Dean of St James Cathedral in Chicago, was announced as the new Dean of York in July and will take up his post in November.

Michael said: “I was ordained in 1983 and worked in parish ministry for 30 years before moving to York Minster as pastor.

“It has been a huge privilege to minister here for almost ten years with a great community and some fantastic colleagues.

“I am pleased to have been able to contribute a little to the life of this great cathedral and look forward to welcoming Dean Dominic this autumn and working alongside him before I retire next year – I am sure that this great church is in safe hands with him at the helm.

“Having been a full time priest for almost 40 years I am looking forward to doing some new things including spending time writing and also cycling around Yorkshire and beyond.” 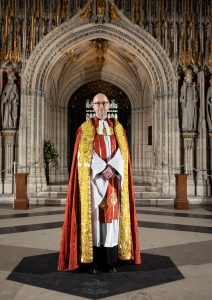