The Very Revd Dominic Barrington, Dean of St James Cathedral in Chicago, since 2015, was today announced as the new Dean of York.

His appointment marks a return to the north of England for Dominic who served as a university chaplain at St Chad’s College Durham for five years.  He will take up his post as Dean of York in the Autumn.

Commenting on his appointment, Dominic said: “I am thrilled to be coming to York Minster at this exciting time as we move beyond the pandemic and look to a renewed call to mission and ministry. With my family I am much looking forward to joining the communities associated with this astonishing cathedral and working alongside Archbishop Stephen, the diocese and the province in seeking to Live Christ’s Story.”

Archbishop of York, Stephen Cottrell said: “Dominic’s extensive experience of parish, chaplaincy  and Cathedral ministry will be such a blessing to York Minster, helping us develop our service to the diocese of York, the northern province of the Church of England and all who come here as tourists or pilgrims.”

The Revd Canon Michael Smith, Acting Dean of York said:  “Dominic and his family will be welcomed by prayerful and committed worshippers, enthused volunteers and a highly skilled and motivated work force all eager to share with him in the next phase of the life of this great cathedral. York Minster is emerging from the pandemic in good heart. We are enjoying worshipping together in person, meeting together face to face again and welcoming increasing numbers of visitors every week to encounter God’s love in this great building.

“Dominic will lead us into an exciting future as we prepare to celebrate our 1400th Anniversary in 2027 and implement our newly approved, trail-blazing Neighbourhood Plan, the blueprint that will govern the development of the Minster Precinct for the next 30 years.”

Dominic began his ministry as curate in the Mortlake with East Sheen Team Ministry in the Diocese of Southwark. He served as a university chaplain at St Chad’s, Durham before becoming priest in charge, and subsequently rector at St Peter & Paul with St Michael’s in Kettering in the Diocese of Peterborough.  He was installed as Dean of St James Cathedral in September 2015 after twenty years of ordained ministry in the Church of England.

Dominic has previously worked with the Arts Council to create and fund new regional touring opportunities for the London Symphony, the Royal Philharmonic, and other orchestras. He also worked for several years with some of Britain’s leading professional choirs and vocal groups.

Dominic is married to Alison, a music therapist, who has worked in both clinical and academic contexts. They have two sons, Benedict and Linus. 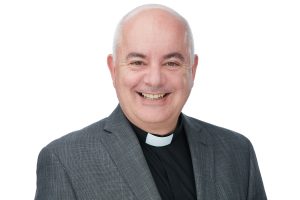