Shards of glass, broken and scattered: A reflection for Remembrance 2020

The village of Youlgreave in Derbyshire lies in a typical Peak District setting.  Some of you may know it.  A few miles outside Bakewell, quite high up, it catches the early winter weather on all sides.

Once thriving on agriculture, its main industry now is tourism.  At its heart sits an impressive church – with a tower that dominates the village.

Inside the church there is also something quite striking.  As you wander about looking at many of its fine ancient features, you are suddenly brought up short by a window that looks surprisingly modern: almost as if it’s abstract art. 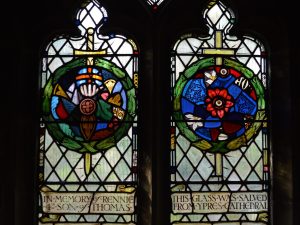 It’s a window full of colour, but it portrays no image.  The glass is pleasing to the eye, but each bit looks as though it belongs somewhere else.

And as you look down, the inscription explains how something so strange has come to be set in an ancient, sleepy, Derbyshire village church.  It reads as follows:

‘In memory of Captain Thomas Crompton Waterhouse,
born 1890 killed in action in advance into Gallipoli 1915.’

‘This glass was salved from Ypres cathedral and other
churches by his brother between 1914 and 1915.’

Shards of glass, broken and scattered by bombing, were hidden away by Thomas’ brother, brought back to England, and set in their parish church after the war.

In a striking way the window represents so much that was broken and changed by the First World War.

It was a war that had consequences throughout the last century.

It changed the map of the world as Germany lost her overseas territories.

It was the beginning of the modern age, with aircraft and tanks used in warfare for the first time.

And for a generation of poets it brought home the full horror of what the modern age could bring: cavalry riding against machine guns – soldiers stuck in sodden trenches.

At this time of year it is always moving to hear those speaking who fought in these terrible wars.  Sometimes it’s in archive recordings of those – like Captain Waterhouse – whose world was changed forever.

A few years ago I remember hearing one of our oldest poppy sellers speaking.

Ernest Carr, then 101 years old, talked with clarity and emotion about his role in WWII and his reflections in older age of the lives he took as he did his duty.

It is a telling reminder of the shadow of war, echoing down the decades long past the events themselves.

It is clear that the pain of war – of so many who didn’t live beyond their 20s – still haunts these men.

A generation was lost, and they speak to us like survivors of an ancient catastrophe which they narrowly escaped.  Sorrow, pride, guilt and anger, all mixed together in the potent emotions they express.

The stillness of a peak district church on a winter morning seems a million miles away from the trenches and the modern world which that war ushered in.  And the wisdom of Captain Waterhouse’s brother should not be ignored.

He brought those precious fragments from the ruin of France to remind his neighbours of the terrible destruction of warfare – not only in single lives but also the fabric of our communities.  Our churches, monuments and homes.

But he was also saying that we shouldn’t lose hope.  We may not be able to turn the clock back but, if we pick up the pieces and persevere, there is the chance to turn destruction into something for good.

If nothing else, the memory of that war – and all wars since – should re-double our efforts to live in peace whenever, and wherever, possible.  The innocent always suffer – no matter how hard we try to avoid it.

The history of a land and its people is changed.  And places that have served as churches for many generations can be reduced to rubble in a day.  War is a very blunt tool with which to resolve the problems of the world.

So today, as we remember those who have lost their lives in warfare, let us also pray that the young people of this generation are never asked to stand in that place again at so great a cost.

And let us pray for all who seek peace – and those who gather up what remains after the devastation of war, and strive to build it into something precious, new and enduring.