Robert Sharpe, York Minster’s Director of Music said: “After a year with no Assistant Organist in post, I am delighted that Asher will be joining us here in York as Assistant Organist, working alongside Benjamin Morris and myself in the Music Department.  We had a very strong field of applicants for the position, and Asher made a great impression.  We are all looking forward to having him on the team.”

Hailing from the North-West, Asher’s musical education began as a chorister at Manchester Cathedral alongside a place at Chetham’s School of Music, where he later studied the organ with Christopher Stokes.

Following a gap year as organ scholar at St George’s Chapel, Windsor Castle, Asher studied for a Music degree at Trinity College, Cambridge. Working closely with the college choir there, he took part in tours across Europe, the United States, and Canada, and features as an accompanist on CDs of choral music by Gerald Finzi and Ralph Vaughan Williams. Upon leaving Cambridge, Asher moved to London, to take up the organ scholarship at St Paul’s Cathedral.

A keen continuo player, Asher regularly took part in performances of Bach Cantatas and Oratorios whilst a student, highlights of which include a project working with players from the Orchestra of the Age of Enlightenment under the direction of John Butt, as well as a performance of Bach’s Matthew Passion, for which he worked closely with English tenor and evangelist, Nicholas Mulroy.

Commenting on his appointment Asher said: ‘I am delighted to be starting work at the Minster this September. Now is a particularly exciting time to be arriving in York, with singing of all kinds restored to its place at the centre of daily worship for this coming term, and with the chance for me to get to know the newly restored Minster organ. I am looking forward to making the most of the many opportunities my new post will offer, and to becoming a part of the Minster community.’ 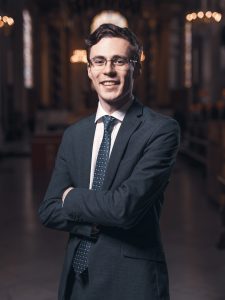